Admission time …. I fitted the top cowl and trimmed to the best fit I could but then had my son Ben visit from Oxford so took the opportunity to have another pair of skilled hands help me get the lower cowl into position …

It was only then that I realised I had over cut the top cowl and would have been better (certainly with the Jab engine) starting with the bottom. The TLAC indicated cut areas on the lower cowl were spot on and only need a little more widening to take account of the larger fins on my Jabiru.

I then put 4 cleco’s in position and it was held like a rock … I could then see that my trimming of the top was not going to work.

I have a couple of options which are being actively reviewed.

1) Buy a new top – pretty expensive and we don’t have January sales in these items !! 😦

Option 2 looks like a viable option so we are going to try that first .. with option 1 as an obvious fallback. 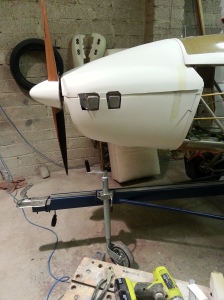 The plan is to get some slim F1 styled scoops (the sort they have just above and behind the drivers head) to act as extra scoops for air but also have a matched pair (one for each side for ‘visual’ balance) to hide the protruding heads.

Watch this space and we will see how the repair goes !

1 May 2020 – very late update .. as I saw someone had been looking at this post recently … well.. option 2 seemed a non starter as ‘why spoil the whole thing for a ‘hapeth of tar’ as they used to say … probably when ships were being built up North !
so .. I paid up and bought new … but … could never bring myself to throw the original .. so it stayed in the back of the barn for years … then .. much later .. I dragged it out .. cut some aircraft alloy strips and riveted in place .. this gave me the increased ‘depth’ back and then had fun aligning drill holes for the fixing bolts

This gave me the option to use either cowl … so I painted up the old (white) one with black stripes … added some poppies and got it ready to celebrate D day invasion landings in July 2019.

I have now just added a number 7 and a 5 to celebrate the 75th year since Jersey was liberated post WWII .. along with some hand painted figures

Whilst outside – I could also get the last crimping down … Sam clamped the steerable tailwheel fittings in place ..

He also took loads of very detailed shots with his amazing camera .. will add these when he has edited. 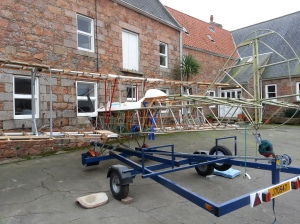 Progress has been slow recently as work has gone crazy around end of year … but engine bits are slowly coming to fruition as well as completing all those 100’s of little jobs.

Cowl is looking good so will start to work on lower part this week. I have the Yellow and Olive paint ready for those parts and the tips to be painted.

Should also start to plan a test covering with the Oratex. Probably tail first

At last we had a weekend without rain and I could get the ‘plane out to do some work that needed the wings fully extended. This included getting the shrouds filed out so that they didn’t impact on the body flanges.

Having decided that Channel Island airspace and usual cross channel flying demands more than a handheld ICOM I have decided to save up and go for the TRIG solutions. Their slim panel mounting and remote box ability makes this a really goo (if not expensive) option. 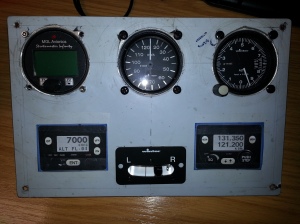 Mocked up the panel look to scale as I had planned to put them on the left and right tab of the panel. By mounting on the central plate I get really easy visibility as well as free space on both left and right panels for other switches like mags etc

Cut these out some time ago from the TLAC supplied templates. As they have been hanging around for a while at the barn I took them home to dry out and then gave them 10% thinned polyurethane coat.

These can now be bonded to the body with suitable 1/2″ balsa blocks backing for support.

Finished the setting up of these, now drilled and wood block support glued in place and ready for final rub down and treating .. then fit to starboard strut inboard 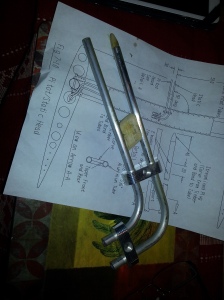 Couldn’t decide exactly what to put in the front panel but Sam, last year, bought me an ex Spitfire variometer which we tested on Boxing day last year by going up in a Piper Cherokee and diving down and back up to 1,000′ over the coast in Jersey !

I have now mapped a central removal panel (similar to rear cockpit) and have mounted the variometer in the middle. 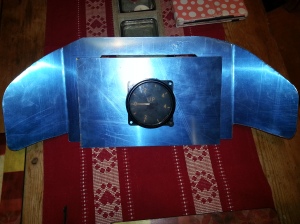 The mockup of the panel was pretty much spot on, with only 15 minutes of filing and small bends to get it to fit exactly within the turtle deck lines.

Once I have decided what else goes into this panel I will cut a piece of my green cow hide ! and stretch/glue to cover the surface before re fitting. 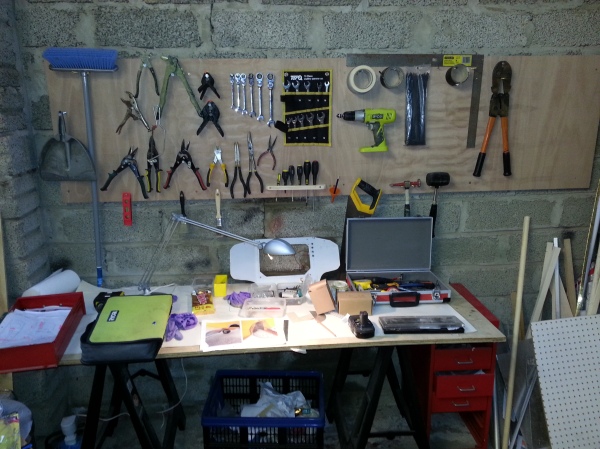 Sam, my youngest (at 23 !), did a cracking job of tidying the new workshop area up. The tools are easily to hand now and saves ages searching for various bits !

One thing I needed to do was invert the compass as I intend to mount it below the upper wing. Guess I will need to insert a sturdier ply plate to mount it to. 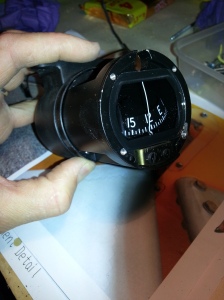 The grub screw in the back releases the centre compass, you pull the outer shroud off to then enable you to pull it forward and rotate through 180.

Neat little screw adjusters for the compass base setting.

Then fully de-burr and it should be ready to mount at the 92′ angle indicated in the plan.

As the entire ‘plane is covered in dust sheeting its safer to put the ‘good clean’ bits in situ … rather than leave them on the side in the barn.