My first aviation engineer was Bob Wright from Jersey Channel Island Aero Services .. I used to love his easy going solid support and guidance ..not making me feel like some oik … muscling in on his profession but embracing, supportive and inclusive

Bob sadly passed away a couple of weeks ago … thank you Bob for all that you freely gave both in skills, friendship and support … I couldn’t have started OR finished without you.

Next was Mike Fleming, who also freely gave huge amounts of time to ‘watch at a distance’ a great skill … to not dive in and show me how it’s done (when all I would have learned was how good HE was at doing it !) but instead, nudge, ask (timely) questions … see if I understood what I was doing and what would then logically follow …. Mike did (and still does) provide context and oversight that meant you felt supported .. and learned from mistakes rather than bury your head in your hands !

Now, in the U.K., I have the pleasure of working with someone like James Milne. A wonderful easy going mine of knowledge and niceness

I could learn something every minute from this guy …. His focused ‘no nonsense’ approach to each and every step and then setting up and driving action to rectify anything is just great to be around.

At the Ranger annual today he spotted that a bevel was not quite as free as it should be .. he followed this through and suspected that he undercarriage had been stressed at some point.

To validate this we needed to get the weight off the undercarriage so, within minutes he was up a ladder, we had moved the aircraft to position it under a main hanger beam. A strop was erected and we had the aircraft floating just above ground level.

We slackened the main u/c pins and then strapped the Left and Right wheel .. so it wouldn’t splay on release, then removed the centre V brace.

Now, with the weight off … you could see and feel the saddle clamps had started to dislodge. I don’t recall any particularly heavy landings .. apart from the first grass one crossing the channel to Sandown …maybe it could have been just 5 years on concrete landings … 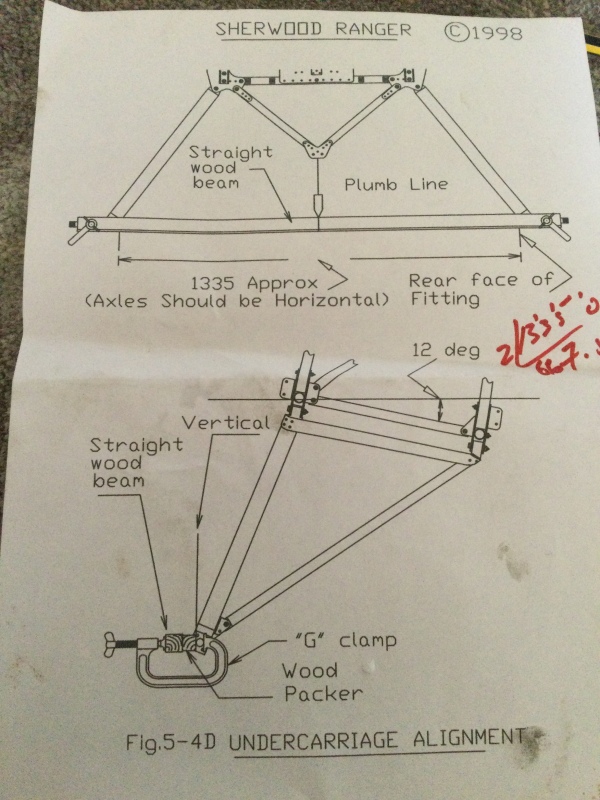 After a good few years of ONLY a tarmac landings .. and around 250 of those … plus, over time, I’ve had the port undercarriage leg off and changed and the starboard one off and new end roses …not forgetting I’ve had both legs fitted with new rubbers post the Smoke (Baby) oil getting on the, and expanding the rubber … it sort of feels about time to recheck all the symmetry

So, start with central plumb line to give me a checkpoint … found I was a few mm out each side …

Bit of IN and OUT a few times little more gentle slackening …. Then done .. never like leaving her on a trolley Jack for longer than necessary

As quite a lot was changed and updated the engine needs a careful planned set of ground run tests.

It’s now been converted from Hydraulic lifter valves to solid lifter valves, the old way (hydraulic) meant that I didn’t have to do any valve checking as they self adjusted. Now I need to include regular movement and gap checking.

The checklist calls for around 10-15 timed and controlled runs .. starting with low revs ..up to 1200 and short runs just to get all oil distributed evenly.

It’s always a pain when you have emptied the oil cooler matrix – this is a new one so starts empty ! .. you need to allow for sufficient oil in the sump to fill that and perhaps any new filter that may have been added.

The dipstick on the Jabiru isn’t the greatest piece of metal known to man as, in the taildragger configuration, you don’t get an accurate reading, the dipstick being calibrated to read when the engine is in a flat orientation. The standard dipstick doesn’t reach the bottom of the sump !

Over and above the standard dip test every flight….I’ve got used to checking every so often by trestling the aircraft up to flying angle .. ie Straight and Level (you need to do this when occasionally checking the rigging and wing dihedral). Anyway, the standard dipstick mark is ignored and it’s ‘about’ 1/8” (in old money) covering the bottom tip of the stick.

At the last annual James, my engineer, grabbed the prop ..pulled the engine into its S&L position and put a stick down to check… the simplicity of this was quite obvious … vs ‘it should be about 1/8 on the bottom of the stick’ .. so I’ve created a new dipstick that goes directly to the bottom of the sump.

The remaining tests slowly take the revs up through 1800 block tests as they call them .. successive run ups and cool downs … giving you chance to check all is working.

Once you get to the 1800 tests the idea is to take it to 50’C oil temperature and THAT should open my TOCA – Thermostatic Oil Cooler Adaptor .. a neat slim block that fits between the engine and the oil filter effectively blocking (COLD) oil circulation until the engine reaches 50.

The subsequent runs take the revs up to 2400 which is where it will be difficult holding her on the brakes so the chocks will come in handy … pays to keep the elevator back in these power checks ! 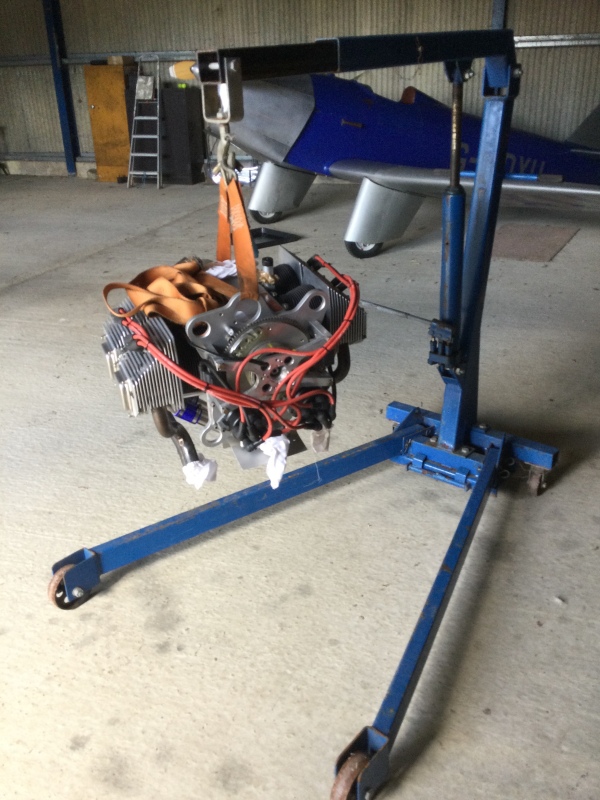 Took the opportunity to replace old hardened engine mount rubbers that had started to craze… also freshen up odd little scrape on the engine mount with hammerite … wish I’d still been around Jersey and my friend Mike Flemings powder coating skills !

Also make sure that L and R CHT and EGT are indeed LEFT and RIGHT ! 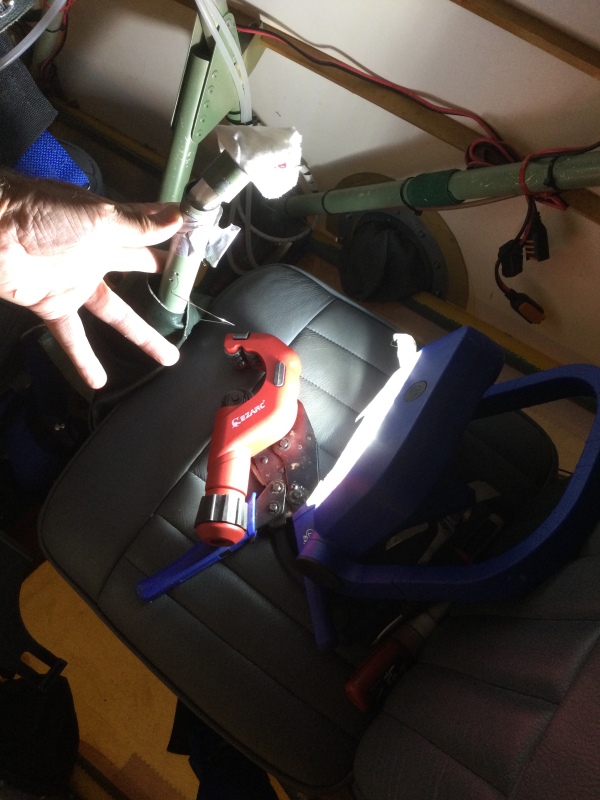 My old joystick end had hardened rubber surround which was making the alloy PTT switch slightly loose, so time to replace … and add something extra

Having researched the market there is a very smart Allen head that offers a PTT plus … he ability to have other electrical operated without the need to remove your hand from the stick ….

Currently my smoke system needs me to take my hand off the throttle OR across over with my right hand in an already small cockpit … the smokingairplanes u it does, however, come with an additional ‘intermittent’ option which, when wired to a suitable switch, allows smoke at the touch of a button …

The slight problem is that the Allen head is quite large and with my panel design having a slightly lower line for fuses .. the two meet! So I needed to take a small amount off the end of the stick.

The tricky piece is you DO NOT want any burr dropping down to the base of the stock unit. So, rather than a saw cut action, I bought a larger diameter pipe cutter that made a perfect job. Less than 60 seconds and your are left with a very neat, slightly sharp edge (inner) and smoother chamfered (outer)

The two new handshakes allowed an easy connection to the existing PTT circuit ..leaving about 10-15cm of cable for ‘working-wiggle’ room if I need to pull them out again. So many cut things super short and it makes it almost impossible to get crimps or soldering kit in there if needed. (The cloth pushed into the joystick tube above is to prevent any debris disappearing down the tube during this operation).

The tricky bit was then to thread through the additional cables using locking wire as a guide and tape hook arrangement to pull them down the tube and exit part way down the stick .. one will be a new dedicated earth ..the other a dedicated power to the head (when needed) and a final 3rd cable to handshake into the smoke intermittent earth socket.