After my  current tally of 5 hours flying and 25 take offs AND landings ! I have a few small snags to complete 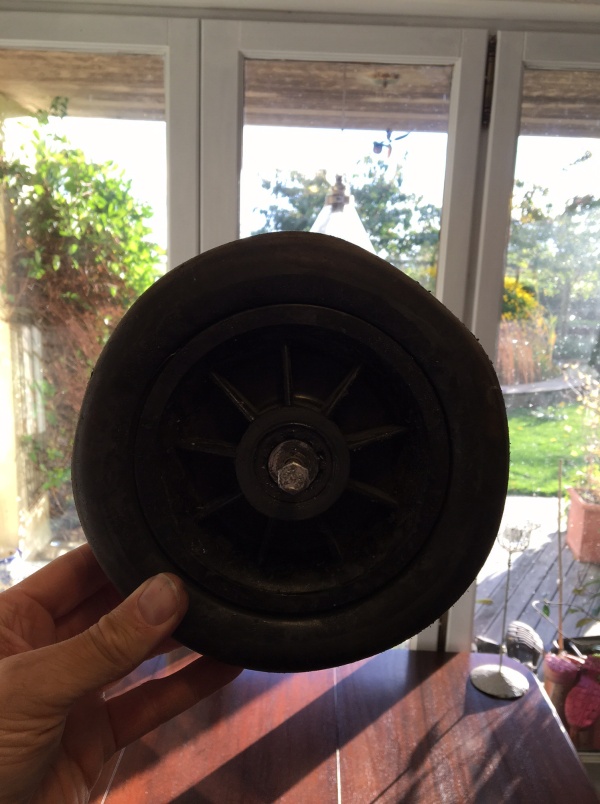 The net effect was that the wheel skidded sideways and dragged across the Tarmac … Effectively flat spotting the hard rubber wheel.

I tried a heat gun to bring it out a bit back to its natural shape but it was too far gone.

Contacted Paul and Ivor at TLAC and ordered a replacement

This duly arrived last week so jacked up the rear .. Removed the old wheel which was pretty grubby by now but very nicely greased ! 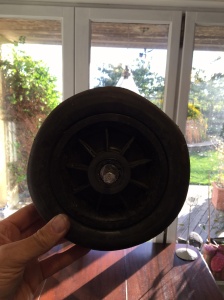 Noticed the new axle pin was somewhat larger diameter so drilled out the Tailwheel support mounts and de burred then greased the new one and in place. All in the space of 15 minutes

One thing I will need to do is add a nyloc or split pin for additional security.

The cable ties that have been securing the main straps of the front harness were cut away and the lap straps retrieved from inside the hanger and clipped into place …..

Will had duly arrived in his full flying suit and hat and was busy running around the pre take off checks along with me. We soon found that the intercom switch I had fitted – which had worked – seemed to have packed in – maybe a bad connection .. so we decided on a series of stick shakes and his acknowledgemet by hand as a means of communicating – along with shouting !

Take off with his 11+ stone on the front was virtually identical to lifting off with just me .. the only thing I would add was that with the now slightly gusting 18kt+ the whole thing felt more stable with the gusts having less effect.

This is definitely an aircraft that teaches you co-ordinated use of aileron and rudder .. Howards voice ringing in my ears .. get the ball in the middle !

You can ‘feel’ she is out of balance before you look at the ball … but a quick glance down to confirm and then get it sorted … it will take a bit of time to be as instant on this as I would like ..

We went into a normal right hand circuit which involves flying just offshore around the southern cliff edges and then right back over Corbiere lighthouse to land . we opted for a touch and go – tailwheel all the way down.. speed uder control then up and away again.

The tower had asked if we could go into the left hand vs right hand circuit as there was parachute dropping in progress south of the centreline. This gave us an opportunity to ‘say hello’ to the house and neighbours who had been asking to see the plane

What had promised to be a very clear calm day turned out to be certainly clear .. but the F2 was 10 going up to 18+ Easterly. Not a problem down the runway (08) but was going to be interesting taxying …

Having opted to disconnect the steerable tail wheel option very early on in the taxy tests – I could sure use it today to assist in preventing ground looping ! I removed the two cables (spliced into the rudder cables) but only removed at the turnbuckle – leaving me the option to reconnect if I change my mind. I found that the relatively tight manoeuvring area outside the aero club meant the rudder on full deflection didn’t give the same tail wheel angle and so it dragged and flat spotted … I now get a dunk dunk on taxying – if you know what I mean .. new wheel on order from TLAC.

Engine started nicely and the go pro seems to have settled – well I have learned how to  use it more like ! This footage is really handy for learning … when you are flying by yourself there is no one to critique you … sharing the video usually invokes a few comments and very useful feedback

I sent a link to Howard Barbour (the very kind gentleman at Little Snoring ) who kindly sat with me for an hour of the most fun, active, banked circuits I have ever done .. everyone should do it .. whether you buy a Sherwood or not

Anyway, Howard said all looked fine but then noted that I wasn’t pulling full stick back on taxying .. he popped a note on the end and said ‘All the way back to the buckle on taxying’ then apologised for nagging !! Not at all … as I said to Howard .. one tip up and the £800+ nice wooden prop would be dust .. nag away Howard .. nag away 🙂

I had decided on this flight to brave the full ’round island .. everything had been settling down and it felt good time for a longer flight.

Duly lined up and the tail was up immediately – 18kt down the line … I had mounted the go pro on the rear of the wingtip this time (a la Little Snoring) so you can now see bothe Elevator and Aileron movement. .. doesn’t move much at all !

I opted for my (now usual) bad weather close circuit .. I have used this technique for the last few flights as a sort of warm up and is everything still ok …. the tower are very supportive and happy to let me do it .. slotting in or widening out for inbounds … this time it was a small one coming in to land vs the Gulfstream jet last time doing touch and go’s

That cleared I opted for a wheeled landing to just start the tail going down then went around to prevent blocking the runway for too long. off and over St Helier and into a full anticlockwise around the island …. hugging the coast and varying between 700′ and 1000′ … quite bumpy crosswind and possibly the effect of the wind over the 300′ cliff edges … mental note for landing on 08 .. keep the speed up over the threshold.

After the full around island I opted to land and check everything over before my next flight which was to include my middle son Will as checker of all things front cockpit and also to see what effect his weight would have ahead of the full LAA checks in a week or so.