This showed a change from my original submission of 80mph and Jon at the LAA wondered why – given that the addition of the wing roots should make it better if anything ?

Now, with the wing roots on she just wants to climb at full power but holding her there the airspeed began to climb steadily up the dial and guess what .. smack in the middle – 75mph

Having thought about the reason long and hard I realised that my 80 had probable been me using the SkyDemon app on my mobile to record each flight and noted down ground speed ! It was easier using this device than all the paperwork in an open cockpit

At the end of my successful power climb retest yesterday I brought her back into the busy circuit at Jersey for a touch and go and once circuit then land.

The principle idea of the first circuit was to get a feel for just how much crosswind there was .. Forecast was between 10 and 14kts mostly at 90′ but sometimes swinging from 180′ to 210′

The first touch was pretty much just that .. Wheeled on and felt the gust so straight on he throttle and up and away .. Lots of rudder to make sure I got a nice (in line with the runway) departure … You see so many (and some commercial) veering or drifting off 20 or more degrees !

The second arrival (to land) was interesting .. And I’m writing it now to share knowledge and how not to do it !

As it was a little choppy on the approach – will add the video shortly – you can see I’m having to use a fair bit of aileron BOTH ways to maintain a nice approach path. Even when I got into ground effect it was still a little blustery BUT …

On reflection my approach speed was too high .. Higher than i normally do in the Sherwood .. I use his technique in the PA28 on days like this and it all works nicely .. Trying to bleed off that speed in a light skippy biplane with the associated gusty conditions was not good

Now, holding off just above the runway to lose some of the excess speed AND also trying to get it down before the next gust I managed to get her smoothly into the main wheels BUT still had too much speed … The INTO wind wing lifted .. And your instinct is to aileron correct it but the problem now is that your ailerons are pretty much none effective .. Should have gone around

She then starts to be driven into the start of a ground loop … Luckily my over speed wasn’t that much .. So the starboard wing tip touched the runway …. Scrape …. Powering right off calmed everything down … Felt awful in the ‘plane and you can see me shaking my head !

– 14 kts is beyond my current skill limit with the aircraft

– Need to practice and build up my techniques again

Footnote – having done this rubbish approach and taxiing in with my head down … A Flybe commercial taxiing was told to hold short and let me depart the taxiway and taxi behind me ….he then asked the tower what aicraft type the little Yellow Biplane was and was very complimentary about it .. Finishing with .. “We have all done that .. ” .. Nice touch 😄✈️

Took off and went into the climb at 1000′ just downwind

On topping out I throttled back to around 2,600 and the ‘plane just putted around and did not lose any height for around 10 mins !

Slight problem above – my second crosswind landing in 14kt at 90′ had a wing tip down and a slight scrape ! Embarrassing but I now know my limit ! 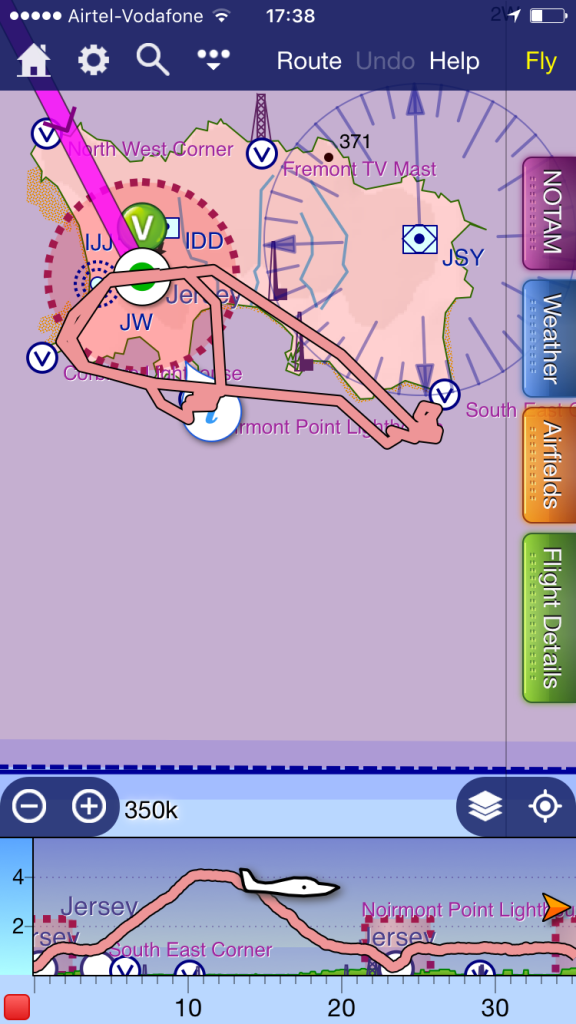 Following lots of grotty weather over the recent months my test certificate provided by the LAA ran out so I needed an extension. Also, my slightly hot running engine meant I needed to review and run a final test of the climb  and (as suggested by the LAA Deputy Chief Engineer Jon Viner) a stall test.

Duly got my new certificate signed by the local Engineer (Bob Wright from CIAS) and took off 15 minutes later ! – not like i’m keen or anything ….

Having added the wing roots the take off and climb out were amazingly different and found myself trying to stop her climbing so much .. throttling back gave me a good rate of climb and a much calmer engine !

Flew down to the South East training area of Jersey .. idyllic as the tide was out revealing lovely beaches and rcoks and shallow clear blue water. Slow turning climb and more  power but still running a little warm so decided to end up having a fun 30 mins handling and then redid the stall test. Again – she just wants to keep flying .. 40 and she is till reluctant to go … finally full back and around 1,000 rpm and the nose bobbed down…

Back into a lovely sunset and slow landing. As the handling had changed significantly I suspected it was going to behave differently and I managed my worst landing to date in the 42 so far ! .. touching poss a little tail first … NOT the ideal … It was gentle and stayed put on the first arrival.

I then created and fitted a temporary gurney to see if I could coax more air to suck out of the lower cowl by providing a pressure drop in front of the lower exit hole. Quick circuit test proved it didn’t work ! running much hotter BUT it did prove I was in the right area 🙂

Plan now is to increase through flow through the top cowl by checking air dams in the top cowls (forcing more air over the rear cylinders) and also block the front area around the new oil cooler to prevent ‘Leakage’ through the lower cowl and hence devaluing the high pressure in the upper cowl ..

Wow .. the stuff you have to learn ! Whish I had my own wind tunnel !