Mike had taken it away following final measurements of the planned dolly/track and worked wonders ! The track runs from one end to the other and the small cradle sits on a quad of bogey wheels. Mike had also sourced a ratchet web handle with a hook that slipped neatly into the base of the tailwheel cradle. It wound up with one finger .. very light and easy. The wheel flaps had also had slots cut and a welded u clamping piece on top. Also, with attention to detail, Mike had lowered the leading edge angled brackets as they were just touching the Sherwood undercarriage. Now we had lots of clearance. 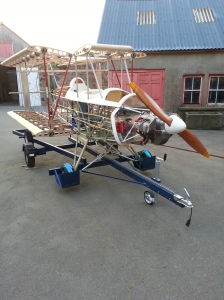 The thing he couldn’t do offsite was set the wing support squares. These weld to the rear trailer bracket and will allow us to design soft support cradles for the wings to rest on when trailering.

Mike had also added a support wheel at the front to make it easier to man handle onto the towing vehicle. 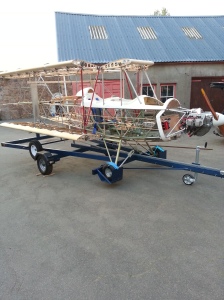 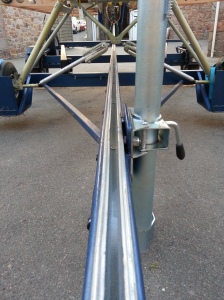 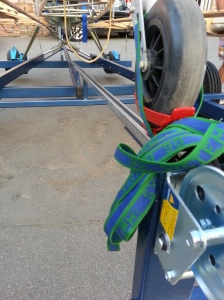 The final weld bits were put in place as darkness fell ! I managed a classic measure twice cut once … which, on reflection, should have been measure THREE times and cut once (not allowing for the depth of the transverse bracket we were mounting on). Mike, as always, came up with an instant solution and re-welded the pieces I had meticulously chopped off and asked me to re-measure and cut again ! (Patience of a Saint that guy !)

He even turned up with the tin of blue paint so not only was it welded on site but tapped (to remove the flux residue), brushed and then painted.

Any Sherwood builders out there who may need a trailer … I am sure Mike would be happy to oblige for a very good price !