Crikey .. January has come and is nearly gone but I have tried to get time to work on the starting problem

With the great help of local friends Mike Fleming and Chris ex Jersey Airport we have slowly gone through the system back to front … One quick eliminaton was to connect directly to the front solenoid and effectively jump start her .. This proved that the engine, starter and associated bits were all functioning properly.

It also proved that the problem lay somewhere between front and rear !

I had worked in two solenoid and so we el inmates rearwards from the front… Having first run a dedicated full length black earth from the rear mounted battery to the rear engine bolt. THis meant we wouldn’t have to worry about any earth connections.

After much tooi g and front and using a booster battery to test we could guess that the power drop over the necessary full length body cables (to pickup rear mounted battery) was too great and so we had to find some way of staining the boost and yet still retain the rear mounted battery.

Mile then hit on the idea of leaving the rear battery in position but also mounting a second battery up front in series. This would have the effect of 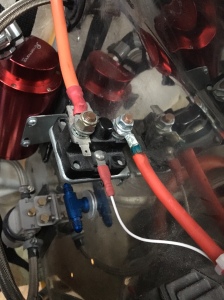 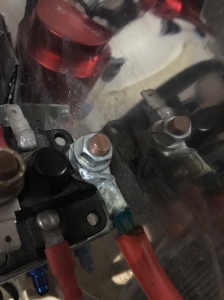 Also .. Having reviewed and re-crimped front to rear we discovered that the very front connection to the engine start solenoid had discoloured and had signs of poor initial connection.

This was cut back until we saw fully clear – non discoloured multi core copper cable. This took about 15mm back then it was fine.

The current plan is to retain the rear battery due to LAA spec and weight and balance. Then put the second battery in the original front mounted tray. This will mean we have only around 1m of cable to run to the starter .. The connection should mean that we have two in situ batteries that charge and provide both start and normal avionics support.